“He that leaveth nothing to chance will do few things ill, but he will do very few things.”
– George Savile Halifax 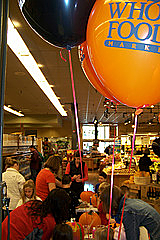 I realize I’m a bit late to the game with this, but it is intentional, as I like to let things of this nature stew for a bit – my take being that jumping to conclusions is the hallmark of intellectual immaturity.  That being said, Here’s an hour-long interview with John Mackey of Whole Foods that I came across via the CrossFit site.  Brent (the wise-beyond-his-years proprietor of heathcare epistemocrat, and @epistemocrat) twittered about this recently as well.  Also included is a 5-minute short featuring the protestor’s (Progressive) side of things contrasted with a representative employee point of view – favorable, of course, to Whole Foods’ take.  Biased, yes – toward the Libertarian point-of-view – but interesting none the less.
I posted my thoughts about John Mackey’s infamous WSJ Op-Ed piece shortly after it appeared, causing, as it did, such uproar and indignation among Progressives – especially among those who considered Whole Foods to be a symbol of Progressivism.  Anyone who’s ever walked the aisles of a Whole Foods can feel, in a visceral way, the Progressive vibe of the enterprise.  My like of Whole Foods goes beyond my Libertarian embrace of social liberalism, though – I’ve always appreciated John Mackey’s Jeffersonian/Libertarian distrust/dislike of government.  It is precisely along these lines, however, that the happy Libertarian-Progressive, Whole Foods-inspired marriage (civil union?) breaks down.  And that’s really too bad.

Every health care reform option has to be viewed through the prism of the current state of affairs.  Wiping the slate completely clean – as much as I would love to see happen – is not a realistic political option and, therefore, any “fix” must be seen as only a stepping stone toward a more favorable type of reform.  In other words, reform will be an on-going process, not a one-trick pony.

That being said – and, in light of the current socio-political-economic landscape – I believe that what John Mackey and Whole Foods has done with their health care benefit structure is to be commended.  He is spot-on in his assertion that we’re in the health care hole that we’re in now due largely in part to the populaces’ abject disregard for their own well-being.  I’ve said before that no health care reform option can be created that will not ultimately implode beneath the weight of a diseased citizenry.  The sad fact is that the vast majority place more value on economic standing than on their own health/well-being.  The only way to force a change in attitudes, then (or for a nation to survive economically), is to place a personal, economic consequence upon poor personal health decisions.

As a correlate to this debate, Skyler Tanner posted, via Facebook, a link to this recent Zomblog offering (Why America Hates Universal Health Care: The Real Reason).  A bit crass and crude at points, but the gist is spot-on, and Jeffersonian/Libertarian at its core – that one should not be held accountable for another’s faulty decision making.  To wit: as much as I appreciate John Mackey’s business savvy, my opinion is that his favorable view of vegetarianism is deeply flawed, and hence, I choose not to support, in economic terms, his lifestyle choice.  And though John by all estimations is an intelligent cookie, I’m sure he’d not choose to support my wanton carnivory (check the science a bit more closely, John 🙂   ).  And that’s all well and fine; to each his own.  I do feel an obligation, though, as a citizen of this fine country (and of the world) to help John out in catastrophic instances.  The tricky part, of course, is figuring out just where to draw that line.  Is type II diabetes an instance of a “catastrophic” occurrence?  Of course, we in the Paleo/Primal community  know that it is not – but you can see what a slippery slope this becomes – and one of the reasons why “reform” will be an on-going, step by baby-step issue.

In the meantime, John – please, please oh pretty please do not quit carrying the full fat version of Fage yogurt at Whole Foods – you’re my only resource in North Carolina, it seems!

14 responses to “An Interview with John Makey of Whole Foods”