No passion so effectively robs the mind of all of its powers of acting and reasoning as fear.

The question of “why should there be a hypertrophy response at all” has puzzled me for some time.  On the surface, inflated muscle mass does seem to be a grossly inefficient answer (in metabolic terms) as to how best to endure repeated-effort bouts of high intensity work.  A massive, power-sucking brain we can surely justify — a huge return on metabolic investment, in an evolutionary sense.  Hypertrophy, though, in my mind, is a bit harder to justify.  Why not more of a hedge, for example, toward improved CNS efficiency?  Or a different type/mix of fiber?  Or an overall shift toward a more power-leaning motor unit makeup.  Of course the various “how to’s” of hypertrophy are, in and of themselves, quite enough to keep the forums and blogosphere rife with speculation, hate-mongering and discontent.  All well and good with the lively, on-going debate on that front; we ought, though, to be asking the deeper questions of just why hypertrophy should be in the first place.  Once we know this, we can better hone-in on how to produce it

Evolution for me is a roadmap that helps answer all questions (save for origin), as to what is most efficient at propagating genes from one generation to the next.  Note that “efficient” does not necessarily imply “optimum”.  Keep in mind that in an evolutionary sense, optimum is not required — what is required is that an organism be more efficient than the competition at passing genes from one generation to the next.  Evolution truly adheres to the wise dictum of not letting perfection stand in the way of the good.  Good enough to git’er done better than the competition is good enough.  Optimum phenotyipical expression is another question entirely.  This is where thinkering, manipulation, and critical thought come into play.  Having a firm grasp on where one is, and where one wishes to be, on the health-performance continuum is critical.

My good friend Ken O’Neill has suggested that hypertrophy can be considered in the same light as the neuroplasticity phenomenon associated with the brain.  In other words (and this plays right into our species’ niche as being extremely adaptive, nimble, and opportunistic), the evolutionary beauty of this response might not lay in it’s uber efficiency, per se, but in it’s extreme adaptability.   A leopard retains its leopard-ness, more-or-less, no matter the environment; humans, on the other hand, morph accordingly.   We are nimble enough to both craft a spear, and powerful enough to then hurl the thing…with enough fine motor control, by the way, to land the spear on target.  Our muscle fiber make-up and CNS “wiring” scream of compromise.

Does this get us any closer to uncovering the “secrets” to hypertrophy?  Probably not.  But if we realize that muscle is both metabolic currency, and that it’s metabolically expensive as all hell to gain and maintain, we begin to see just how much absolute work is required to elicit a hypertrophic response; we begin to see the difference between training for “health” and forcing the body into an all-hands-on-deck, survival response.  We also begin to see why we have such wide-ranging genetic predispositions for certain phenotypical expressions of “fitness” or “performance”.  You can take the lanky kid outta the savanna, but you can only somewhat take the savanna outta the kid, so to speak.

If hypertrophy is our species’ evolutionary answer to surviving an extreme (and hopefully short-term, from the body’s point of view) environmental onslaught, it stands to reason that the onslaught better be pretty damn severe for the body to invest in such a risky metabolic fix.  That this “fix” can also be utilized as a ready fuel source should the onslaught subside is just pure evolutionary genius.

This then implies that if maximized hypertrophy is what you seek (as opposed to mere superior health), then you’d do well to (1) have  access to a large and varied tool box so as to enable working on various movement patterns from the totality of the force-velocity curve, (2) become a master craftsman (technician) so as to manipulate these tools properly, (3) be possessed of the tenacity — the wherewithal — to soldier through the requisite hard work; reading/writing about this is easy, implementation, however, is a never-ending series of gut-checks, and (4) you better have some expendable time on your hands.  We can effectively trim a lot of excess fat from workouts, but the fact of the matter is that an exorbitant amount time under the bar is a necessary evil.

Pushing the performance/hypertrophy envelope is a Faustian bargain, no doubt — which is why so few choose to pursue this path.  Many more are quite content with superior “health” and/or various degrees of performance leading up to the all-out assault on optimizing one’s phenotype — conquering Mt. “Swole”, as it were.  But isn’t this true in all areas of life?  In all areas of maximized performance?  Why is it that we think human performance should follow rules outside the dictates of of nature?  That there must be some inherent “magic” involved?  Sure, the totality of human performance has always been, and will always be, a mixed bag of inheritable traits, epigenetic factors, and human will — all in varying degrees no less.  We are the opportunistic species; placicity is our evolutionary endowment.  For each athlete who’s made it via brutally hard work, I can show you another who was just “born” phenomenal.  Same with the musician, and with the mathematician.  But there is no one formula, one recipe, for success.  We would not have survived as a species if it were otherwise; each step toward singularity is a step toward extinction.

So the 21 Convention is now in the rear-view window, and the Ancestral Health Symposium lay ahead.  It’s been a whirlwind last few weeks.  What a great time I had with Anthony Johnson and the rest of the 21 Convention crew.  Fantastic speakers, enthusiastic attendees and an awesome atmosphere.  The unveiling of the ARX Omni was a highlight of the event for me, and I was able to both discuss this tool’s place within the greater toolbox, and allow some of the attendees to give ‘er a test drive. 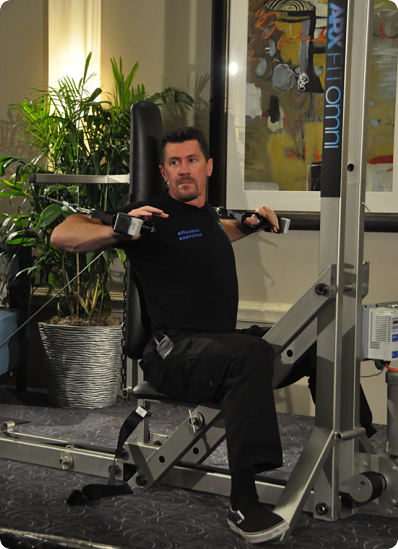 I also got to spend quite a bit of time with Richard Nikoley, of Free the Animal fame.  We hit it off like long lost pals.  And why not?  We’re both ex navy men, with a hell-bent Paleo leaning.  I can tell you that Richard is just as “take no prisoners” in person as he is in “blog life”.  What a cool cat.  I look forward to spending more time with him out in LA next weekend.  So what’s the TTP pitch going to be in LA?  Well, Skyler and I intend to champion Physical Culture’s rightful place — the “new” Physical Culture, that is; Physical Culture 2.0, if you will — in fixing the damn healthcare quagmire we find ourselves in now.  Since we hail from the epicenter of this integrative holistic medicine/fitness movement — Austin, Texas — it seems fitting.  Stay tuned 😉