Yoga, an ancient but perfect science, deals with the evolution of humanity.  This evolution includes all aspects of one’s being, from bodily health to self-realization.  Yoga means union – the union of body with consciousness and consciousness with the soul.  Yoga cultivates the ways of maintaining a balanced attitude in day-to-day life and endows skill in the performance of one’s actions.

…”There are hundreds of ways to kneel and kiss the ground.”

So I was listening to Krista Tippett’s On Being last week — Krista’s show being one of my favorite commute podcasts — and was absolutely enthralled by Seane Corn’s description of Yoga as being “body prayer”.  What an awesome analogy.  And not just for Yoga, but, in my mind, for all pursuits of true Physical Culture.  This is one commonality that I’ve observed among those who, regardless of their particular fitness expression of choice, remain in the Physical Culture scene for the long haul — that the expression of choice becomes a vehicle for (or toward) something much greater than becoming better at that particular discipline.  In essence, practice of the particular discipline of choice continually re-establishes that connection between “self” and “other”.  Refined and bettered skills, body composition, what-have-you then become a nice secondary consequence, rather than the focus of the pursuit itself; it’s rather like the old axiom of only finding true love when you’re not actively looking for it, or of finding God only in the silence and stillness.

Of course it wasn’t always this way for me, and I initially came to Physical Culture as a kid who wanted to get “swole”, dominate on the football field and, of course, (and being devoid of any other talent) to gain some kind of an inside with the ladies.  I believe this is the natural course of action for these things.  Great artists, it seems to me — those with real staying power — follow a similar path.  And what is the essence of Physical Culture if not an artistic expression of sorts, or (and to steal a rif from Seane), body prayer?

So give a listen to this particular episode of On Being — you won’t regret it.  Yeah, even the most hard-core, HIIT weight trainers among you will be able to relate.

case in point: just check out how Seane describes her practice of  Vinyasa Flow Yoga, in the clip below.  Does this not sound like an athlete — any athlete — in the zone?

The linking of mind and body; remaining clear and steady, focused and grounded.  I like to associate Yoga (and like practices — for me, that would include hucking the ol’  fixie about town and sprinting.  MovNat-like endeavors?  Yep, that, too) as the “Yin” to HIIT’s “Yang” aspect.  And in both practices, I attempt to engage what Seane is speaking of here — a direct linking of mind, body and spirit.  I have a client who is active in both weight training and ballet; an awesome pairing, I think.  And kudos to her for dismantling preconceived notions both of what it is to be an dancer, as well as what it is to be a hellified strength athlete.

Now, most would consider a high-intensity slam-fest as being anything but a spiritual journey; why, though?  In my mind, it’s just another pathway, another opportunity to “connect”.  Anything that is physically challenging, and that can help razor-focus the mind is an opportunity to help link the spirit to the other — whatever “other” might mean for you.

Physical Culture as analogous to the culinary arts –

Have a look at the menu offerings at one of my and Meesus TTP’s favorite Austin-area restaurants, Foreign & Domestic.  Beyond this being high-dining “hog heaven” for the Paleo-minded, I am reminded, once again, of the parallels between the crafting a fine dining experience and expert fitness programming.  Both become works of art in the hands of the skilled practitioner; both, too, can become deconstructed and devalued to the point of being nothing more than a soulless, for-profit-only, vehicle.   Quality, in both disciplines, can be found in the love of, and absolute reverence for, the art.  Industrial fitness, like industrial food, is an anathema to the refined pallet.  And, too, elegance is found in simplicity.  The good need not be complicated and, in fact, to the extent that a food or fitness program is overly complicated is simply an attempt at covering what is lackluster at the onset.

On to the workout front –

Sprints at the local high school.  Ropes, bars, and other fun.  Check out some of the new toys!

Immediately following each of these leg press sessions, I hopped on the old fixie and rode — hard, but intermittently so; fast when I did put the hammer down, though and pretty damn far as well!  All-in-all, a nice mix of work.  And in excellent, ATX (spring-like!)  weather.

The Austin Primal Living Group hosted a pot luck dinner on Saturday, March 12th; among the many attendees was none other than Angelo Coppela, host of the most informative and expertly produced, Latest in Paleo podcast.   Angelo and his friend Tom Sadira (mistahmojo!) were here in the ATX — the epicenter of Physical Culture — to attend the now infamous South by Southwest Film, Interactive and Music festival.  Angelo and Tom were nice enough to take time out of their SXSW partying to drop by our little Austin area Primal Meet-Up shin-dig, even going so far as to bring along some of that rockin’ Paleo beef jerky.   And it’s a tasty recipe, indeed!  Do check it out.

On Sunday, Meesus TTP, Angelo, Tom and I swung by the Efficient Exercise Westlake studio for a CZT/ARX (Accommodating Resistance EXercise) throw-down.  Both of the fellas survived the session (at least long enough to get in a post-workout photo op, and some follow-on Tweeting), but apparently brought Fago de Chao to it’s collective knees in trying to satisfy the guys’ resultant — and rampant — follow-on carnivory 🙂 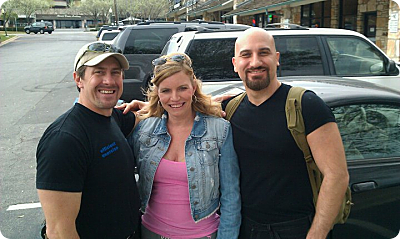 Me, the lovely Meesus TTP, and Angelo. Hat tip to Tom “mistahmojo” for snapping the pic

Check out the clips of the guys’ CZT/ARX tussle at the Efficient Exercise YouTube page, or at our Facebook page.  Sweet!  But be forewarned – you might want to tone the volume down a bit when watching Tom’s workout, if you think the shrapnel from a little F-bombs might hurt 😉