“A man will be imprisoned in a room with a door that’s unlocked and opens inwards; as long as it does not occur to him to pull rather than push.” – Ludwig Wittgenstein

Heh; OK, so you thought I’d fallen off the edge of the earth, huh?  Well, not exactly; it’s just that I’ve just been dedicating most of my spare time toward prepping my presentations for this summer’s upcoming 21 Convention in Orlando, and the Ancestral Health Symposium in LA.  What little time I have had for leisure reading as of late has been directed toward (on the recommendation of my good friend Ken O’Neill, of Smart Fit) Peter McAllister‘s Manthropology, and a couple of 1985 editions of  The Coaching Association of Canada’s “Science Periodical On Research and Technology in Sport”; in particular, Strength Training Part I (Classification of Methods), and Part II (Structural Analysis of Motor Strength Qualities and its Application to Training).

For an overview of McAllister’s fine book — and a bit of fascinating follow-on audience Q&A with the author, checkout this fora.tv presentation.  If there were any lingering doubts in your mind as to whether the agricultural revolution has been a complete and utter disaster vis-a-vis mankind’s  robust nature (the male, specifically), this work should once-and-for-all nullify those doubts.  And if any doubts remained as to whether the human genome has suffered as a consequence of (1) a lack of “herd thinning”, and (2) a general and substantial decline in the required day-to-day “honing and hardening” of the genome, this should eliminate those doubts as well.

It has been my long-standing belief that we (trainees) can not only acclimate to — but indeed thrive under — a much greater work capacity than we (society in general; the S&C community in particular) currently give ourselves credit for.  This book goes a long way toward substantiating that notion.  Greek trireme rowers offer a perfect meme for this idea of a robust general citizenry’s work capacity.  A greater work capacity allows a trainee to spend more productive time actually training (general S&C, or sport-specific), simple as that.  Think of work capacity as GPP (general physical preparedness) writ large.

Although I certainly (and highly) respect the work of Art DeVany and Doug McGuff, I do have to respectively disagree with them on the point of hunter-gatherer’s average daily energy expenditure, and hence, modern man’s toleration for (relatively) high-frequency bouts of intense exercise.

A quick interlude is in order here.  I take the point of view that looking to modern hunter-gatherer societies is not a particularly good example of our true genetic potential vis-a-vis inherent work capacity.  Modern HG’s simply do not face the same predatory fears that our more distant relatives faced on a day-to-day basis.  I picture bands of stone age HGs constantly pursuing migrating game while at the same time themselves being pursued by predators.  No time to lounge and eat figs between infrequent hunts for these HGs.  Man as the Hunted-Gatherer is the scenario that makes much more sense to me.  That means bursts of high power output, yes — but those bursts were interspersed within a constant, and continual movement/migration, rather than idleness.

Art, Doug and myself do, however, agree on the ridiculously small amount of intense exercise required to maintain a person’s general health.  What I’m speaking of here is pushing the performance envelope while ensuring that health remains optimum — in other words, the other side of the health-performance curve.

“Heath” of course, is a multifaceted, ever-evolving concept; one thing we can agree on, though, is that the definition of health as being the mere absence of disease is, well…lame.  We’re smarter than that, and demand more than the “vacuum definition”, pedestrian take.

I’ll flesh this idea out a bit more at the 21 Convention, but essentially “health” is a balance between, one the one hand, maintaining optimum internal parameters (blood profiles, inflammation markers, organ and joint robustness, etc.), and on the other, maximizing one’s ability to both produce, and absorb, force — in other words (and if we introduce a time element here, which we must as we live in the “real world”), the ability to generate and absorb power under various and unpredictable, “real life” scenarios.  The “various and unpredictable, ‘real life’ scenarios” part implies that there is a certain environmental and ontological context which must also be considered.  Ours is a world mostly free of predators and, in general, one that requires less “honing and hardening” in order to survive.  What is considered “healthy” or robust today, however (no matter how spot-on the internal markers might be) would simply not pass muster in Greek society 2,000 years ago.  And although those Greek trireme rowers were undoubtedly GPP standout, power-producing machines, one can only speculate as to the state of their internal bio-markers of health.  Health and performance is, as are most things in life, a delicate balance against a backdrop of the “unknown and unknowable”.

On the bright side, though, if one assumes a 100,000 year timeframe for most gene mutations to take hold (yeah, yeah, I know — I said most), there is hope.  Get your diet squared-away, folks, and bust your ass (intelligently!!) in the gym and in the great outdoors — do your part to put a squelch on this downward slide of man!  Become the phenotypical expression your genetic forefathers would be proud to claim!

And a quick aside: here’s a great post on the subject of overtraining (as opposed to under-recovery) — and yes, there is a big difference between the two.  And just how does one boost recovery ability?  Apart from the obvious (following sound nutritional practices, sleep patterns, and reducing chronic stressors), you’ve got to increase your GPP.  It’s the dirty little secret one one wants to talk about.  Plain and simple, enhanced performance does not come easy — if you want it, you have to work diligently (though, intelligently) for it.  How do I prevent slowdowns due to overuse injury (the tendonitis example in the linked post)?  I conjugate — constantly vary — my workouts.  My body knows no ruts.

As for those cica 1985 documents — wow!  The author is Dr. Dietmar Schmidtbleicher, University of Frankfurt — translated to English by none other than Charles Poliquin.  My initial thought upon reading these was, no wonder the Germans (east and west) were so friggin’ dominant in international competition.  These things read as if they were written in 2011.  Amazing…

Presenting the “health/performance continuum” concept to the lay public

The following clip is of me recently addressing a small group of professionals, none of whom (save for one) have anything at all to do with the fitness industry.  The topic is the general public’s misconception of the relatedness of athletic prowess to general health.

So I’m trying to whittle this particular off-the-cuff presentation topic down to a solid, professional, 10 to 15 minute deck-plate spiel.  And remember, this is addressing the lay public here, and my main objective is to get them to reconsider the definition of “healthy”, and the requirements for maintaining health (by way of commitment — as measured, especially so in time expenditure), and their notions of “health” as it relates to athletic prowess.

Suggestions/critique towards that end would be greatly appreciated.  It’s hard for me, sometimes, to think back to a time when I, too, considered extreme athleticism to be analogous to health.  I had to actually travel the path to figure this out on my own; surely this misconception can be nipped in the bud — especially so, in young, aspiring athletes.  But, too, in those who consider the super human exploits of these athletes, and then think to themselves, “well, I can never do that, ergo, I can never be healthy — so why the hell even attempt?”

Changing this paradigm will be one small step toward changing what is now a world-wide health care crisis.  Something I plan on discussing in LA this August. 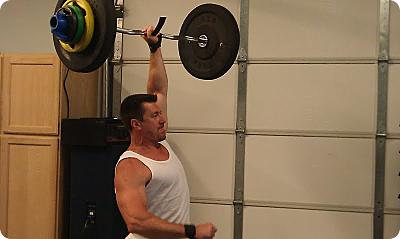 Creative uses for the EZ curl bar; Creds (aka, the single-arm snatch)

Hucked it on back to Rosedale!

For the EE fixie “poker run” workout,  I’ll ride from the Rosedale studio, to the downtown studio, over to the Westlake studio, then back to Rosedale, with selected lifts at each stop.  I’m thinking start and finish with trap bar DLs at Rosedale…yikes!  Or some combo of DLs, farmer’s walks and Prowler work?  Oh yeah 🙂

(A3) parallel and monkey bar work

Sprints, hurdle hops, hop sprints … and more fixie riding than I could shake a stick at!  😉