“Consistency requires you to be as ignorant today as you were a year ago.”

Strap on the seatbelts, here we go for another week’s worth:

Ahh, Easter Sunday, and no better time to squeeze in a good workout. The weather took a turn for the better, and that gave me all the nudge I needed to jump outside and into this impromptu, Easter Sunday mash-up:

So this is another example of a “workout” that’s properly better qualified, I suppose, as “play”.  It’s difficult to quantify this kind of a “workout” — kinda like trying to quantify x-number of hours rock climbing, or kayaking, say — so just use the example here as a “type model”, and nothing more. 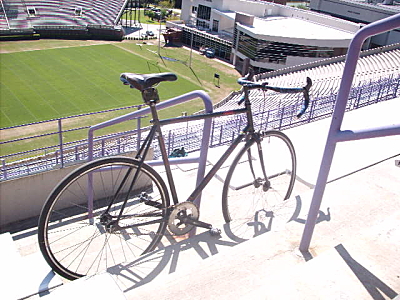 Hey, how'd that fixie find it's way to the upper deck?

Notice the shift in my in-house “gym” workouts as of late — a definite move toward the strength-speed/raw strength modality.  The reason behind this shift is that due to my circumstances: I’m able to work on both sprinting and speed-strength modalities over the weekends, outdoors, and at home.  As the weather continues to warm and the spring rains dissipate, more and more I’ll be able to get in speed/power workouts at my “playground” (see the pics below).  For now, though, let’s look at what I did this Tuesday morning.

4 rounds of this complex.  As is my usual, this workout was preceded by an approximate 10-minute, dynamic warm-up, then 2 “bridge sets” of the actual complex, (at a lighter, then semi-heavy weight), the purpose of which are to serve as a step-up to the actual working weight.

For more early morning, caffeine-fueled fun, try this one on for size!

I couldn’t locate a decent snatch catch demo video.  The exercise, however, is performed thusly: rack the barbell across your shoulders as if you were to perform a high-bar, Oly-style back squat.  From this starting position, immediately transition into the snatch catch position — think overhead squat, done blindingly fast.  “Jump” the bar off of your shoulders and into the fully-extended, overhead snatch catch position, while at the same time transitioning your lower half into the catch position.  This basically amounts to a full snatch without the pull portion, if you will, and is meant to more efficiently practice the low catch portion of the exercise.  This has always been my weak-link in the exercise, as I’m a much better “puller” than I am a “transitioner” or “catcher”.   If I had to guess, this probably has to do with a lifetime of overall, posterior chain emphasis.  As I’m not a competitive Oly-lifter, though, and only use the exercises and their variants as a means to better overall athleticism, I’ll take the hit.

*Quick editorial note.  I have made arrangements to shoot some video clips of some of my more “off-beat” exercises.  I realize that seeing an exercise being performed makes all the difference in the world in understanding and modeling.*

Here’s a good article, written by Dave Tate (for T-Nation), that spells out the advantages of — and the proper performance of — the box squat.  Note that I am as far from a power lifter as one can be; however, this doesn’t prevent me from copping good ideas from the sport.  All athletes, regardless of discipline, require excellent glute, ham and hip strength and the box squat is one of the best ways I know to improve those.

An additional word about box squats: as this is primarily intended as a hamstring/glute/hip strength exercise, the knees must not travel in front of the ankles on the decent into the hole (or, on the concentric portion of the movement, for that matter).  This position/motion will limit the contribution of the quads.  Sound easy?  Try it; it’s not by any means.  But if you take the time (and suffer the humility of having to used reduced weights until the hams/glutes/hips catch up in strength) to lean to perform the exercise properly, you’ll be rewarded with a set of very strong (and shapely, if that’s your game) hams and glutes.  The box squat and the glute-ham raise are unsurpassed, imho, for effectively building posterior chain strength.  Couple these exercises with the deadlift/low and high pull variations and (in the power realm) the clean and snatch variations and you’ve got your base, posterior chain work covered.  Then, take that newfound strength and power to the field and sprint, or, if you like, chunk heavy stuff for distance.  Want to blow-off some serious steam?  Pretend you’re performing an overhead caber toss with your bosses head.  Hehe, juuuuuust kidding — seeing if you’re paying attention 🙂

Saturday — Fun at “the playground” 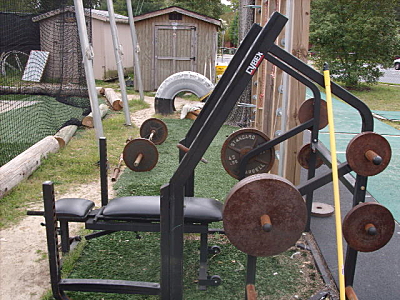 My kind of playground 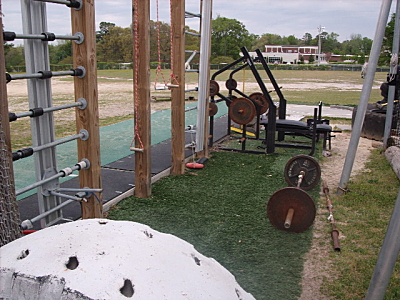 …as seen from the backside

Another one of those workout/play combos today.  I put an emphasis on muscle-ups (performed on a pull-up bar) and what I call the “Werner Clean & Press”; check out the second exercise shown in the opening seconds of this video clip of hammer thrower Koji Murofushi.  Koji emphasizes the pull portion of the exercise (i.e., the weight is thrown higher, almost a power snatch motion) more so than does Werner in his execution of the same, basic movement; each athlete is looking for a slightly different effect from the movement — more shoulder/chest/triceps explosion contribution for Werner (a shot-putter); more hip explosion for Koji.  Subtle, though important differences in exercise execution, and good examples, in each case, of morphing a basic exercise to fit specific needs.

I did 4 rounds of that superset.  Then I played around with a few sets of hurdle hops and overhead caber tosses for distance.