“Human beings, by changing the inner attitudes of their minds, can change the outer aspects of their lives.”

So I’ve decided to follow the look under the hood with a purview of how the ol’ chassis is holding up, and what better method to do so with than the gold standard body composition test, the DEXA scan.

The big selling point of this technology, of course, lay in it’s ability to accurately and non-invasively measure bone density, and as more and more folks succumb to the horrors of a SAD/non-Paleo-diet-induced osteoporosis, this provides the grain-chomping, brittle-boned (1) a vivid snapshot of their deteriorating scaffolding, and (2) a means by which to be shock-sold the Bisphosphonate class of wonder-drugs (Boniva, Flosamax, etc.).  It’s a beautiful, beautiful, 3-way partnership; feed ’em crap, show ’em the in-your-face results of eating said crap, then sell them a drug that enables them (in one respect, at least) to continue eating that crap.  Win-win…and — cha-ching! — WIN again!  😉

Mostly seen as a side benefit of this technology — yet what those of us in the Physical Culture community would be most interested in — is the DEXA’s ability to accurately measure ALL the constituents of one’s body composition: fat, lean tissue and bone mass.  In other words, it’s the most accurate, all-encompassing picture of one’s body composition that can be had.

Now, as I have the great privilege of living in *the* epicenter of Physical Culture, Austin, Texas, I have ready access to the University of Texas run Fitness Institute of Texas, where Executive Director, Phil Stanforth, and Operations Director, Julie Drake, oversee a grade-A organization of fitness/performance-smart professionals.  In fact, we at Efficient Exercise are now in partnership with the fine folks at FIT, offering DEXA services to our clients at a much-reduced rate.  Not only do clients receive a full report of their scan results (the most of which, of my report, I’ve included below), but also a comprehensive explanation of the results from one of the astute FIT staff.

Note: for those of you making the trip to Austin this spring for what’s quickly shaping-up to be the Burning Man of the Paleo/Primal set, PFX12, we will have have a limited number of slots available to obtain your own DEXA Scan report and comprehensive explanation from the professionals at FIT.  We’ll update PFX12 website as the specifics of this service become available.  Check the PFX12 site for more details as they become available.

So without further ado, here we go.  Ain’t no Photoshoppin’ and/or airbrushin’ this stuff, folks!  And just a side note: airbrushed or not, LL does look mighty (surprisingly even?) hot, here 😉  I dunno, maybe it’s the Marilyn thing…

Anyway, back to the subject at hand.  So below is a visual image of the raw data, produced from approximately 7-minutes worth of actual scan time.  Note the bit of scoliosis in the mid/low back.  Now, I haven’t thought of this one iota since my days of playing college ball, when the team chiropractor pointing out this condition to me.  I remember at the time asking if it was a problem, and his reply being “based on your performance, apparently not.”   My kinda doc.  The question in my mind now is, I wonder how much extra performance *could* be squeezed-out of being perfectly aligned.  I also wonder if this is a genetic thing, or something resultant of my daredevil (read:bone-headed), no-stranger-to-the-ER, youth. 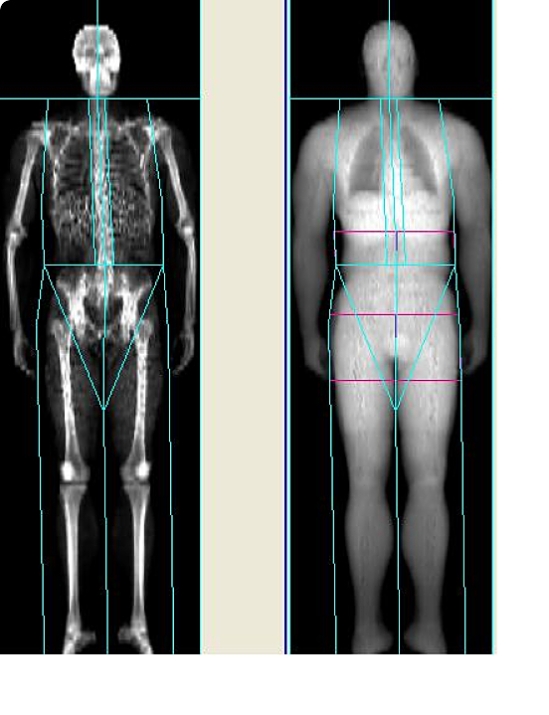 And now, the pertinent portions of the full report.  I realize these are a little tough to read; gotta work within the limitations of the blogging platform, though.

What would be interesting — and what I’d kill to have — are comparison data from my competitive days, where I was in the peak of my performance/fitness ability (health, of course, being another matter entirely), and played at between 220 and 225.  Aside from the extra amount of muscle I carried in my neck at that time (heh…think prototypical Neanderthal), I wonder what the rest of my composition would have looked like.  If I had to guess, I’d say that my BF% was a little higher, but not by much.

So this is quite interesting.  A 10.6% BF level without purposefully trying to be lean.  If anyone has seen me eat, they know that I do so with reckless abandon.  The key, of course, is the consumption of a Paleo diet — though I do enjoy the occasional corn tortilla, corn chips and salsa, and the much more frequent beer.  I also swill plenty of raw, unpasteurized dairy (usually reserved for post workout).  These are the n=1 tweaks that I’ve found work for me, though these few indiscretions usually have me exiled,  by Paleo dogmatists, to the nutritional equivalent of Lesbos; that’s the topic of another post though, I suppose.  At any rate, if I were a bodybuilder, a 10.6%, off-season BF would be pretty damn good — not far to go to get to stage condition — and a hell of a lot healthier than bloating up only to drop right back down again.

Oh, and one thing that I did not include from the report is that, at a BMI of 30.6, the World Health Organization considered me “obese”.   I suppose it’s time to whittle-down into the single-digit BF so as to rectify that!

So what, exactly is “healthy”?  And can “healthy” (as opposed to “performance”) even really be adequately defined?  None of us in this community is particularly satisfied (nor should we be) with the trite “absence of disease” definition, but damn if we don’t keep getting lead back to that point.  Health, of course, is a condition that is in continual flux, a condition defined not only by internal functioning and parameter measures, but also how those parameters react to epigenetic, cultural and societal influence.   Health is a distinct function apart from measures of “fitness” and/”performance”, and yet it is intimately tied to these measures as well.  A simple thought experiment:  how many victims of the 9/11 tragedy sported “perfect” blood labs and DEXA screens, yet perished due to a fitness base incapable of rising to the occasion? An extreme example, yes — and yet…well, it’s at least food for thought.

And with this thought in mind, checkout the fantastic post, Norm and normal: the social construction of health, by Dr. Ricky Fishman.  Good, thought-provoking stuff.

In health (and performance!),